This is going to be an overview of the tool the features and also why this different from some of the other Microsoft services that deal with project management. We’re going to talk about the Microsoft Projects offerings for Office
365.

Microsoft currently has three offerings for tasks and project management in Office. 365 first is planner. So planner is an easy to use task management system built specifically for Office 365.

It has a very simple user interface and lends itself well to managing small projects or teamwork you create tasks as cards and then you add them to boards. So it’s very similar to apps like Trello.

There are charts and scheduled views and it uses Microsoft projects 365 groups for permissions.

There is a web app for the browser and out for teams and ones for IOS and Android an integrates with Microsoft to do so, you can assign tasks in planner and they will show up in people’s to-do lists.

There’s no extra charge for planner as it is included with the Office 365 plans for business Enterprise and education. The next offering is Project online, which is also known as project web app.

This was ported from the on-premises version of project and it’s based on the classic version of SharePoint online and doesn’t work. Well with modern Chevron size or Microsoft 365 groups and there’s no support for the Power Platform. 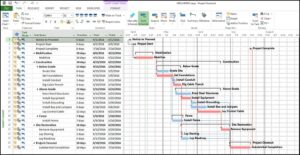 However, it does include more advanced project management features, like resource and financial management, baselining and critical paths and project and portfolio management, which you won’t find in any of the other offerings and you can also use the desktop client version alongside it.

It’s not cheap. It’s an add-on to what you already pay for your Office 365 license and at the time I’m writing this it starts at $30 per person per month and goes up to 55 dollars for all the advanced features and although it’s being sold and supported by Microsoft projects. They aren’t developing for it anymore, and it’s considered a legacy app at this point.

So what we’re going to talk about in more detail today is project for the web, which is also now just known as project. This was built from scratch for Office 365 and is the most recent addition to the family.

It’s all browser-based. So there’s no app or client and it has a very simple interface that allows project managers to get up and running pretty quickly.

As well as project plans, you can add road maps to get an overview of how a number of projects are progressing together. Project for the web is not free. It is an add-on to your existing Office 365 license the plan start at $10 per person per month for the basic features and you can pay up to $30 for the roadmap feature.

So let’s take a look at project for the web.

When project is activated in your Office 365 subscription, you can access it through an icon in the app launcher. When you do that you land on the home page and from there. You can create your first blank project or roadmap.

I’ve created a project to show you how the tasks and Views work together, and I’ve also made it a favorite so I can just click on the tile here and open it up.

Notice on the far right? There’s a groups members link when I click on that. I see all the people that have access to my project plan. This is because I attach the plan to a Microsoft projects 365 group.

The sales and marketing group

This makes managing permissions to the plan really simple and is one of the advantages that this version of project has over the Legacy Project online app.

The grid view starts out blank and I’ve added a list of new tasks here. I can move the tasks around. I can copy paste and delete them and I can get more info about them.

I have some tasks that are subtasks and some that are summary tasks like these ones called video and thumbnails and I can make any task a subtasks well.